I’ll keep this short and sweet since I know y’all (like me) are probably counting down the hours until we’re free to celebrate Labor Day in all of its 3-day weekend glory! Basically in about 4 hours this will be me:

Not a drop of shame in my game, I’m ready for some free time! I’m puppy sitting for my brother and soon-to-be sister-in-law this weekend while they’re in Hawaii scouting wedding venues, but beyond that I’ve got nothing but reading, reviewing, college football watching, and Fantasy Football draft picking on my plate. #blessed

But before I leave you for all those “plans,” I thought I’d post this week’s:

What’s it about? First Lines Fridays is a weekly feature for book lovers hosted by Wandering Words where we dare to ask: What if instead of judging a book by its cover, its author, or its prestige, we judged it by its opening lines?

READ ON TO DISCOVER THIS FRIDAY’S SOURCE: 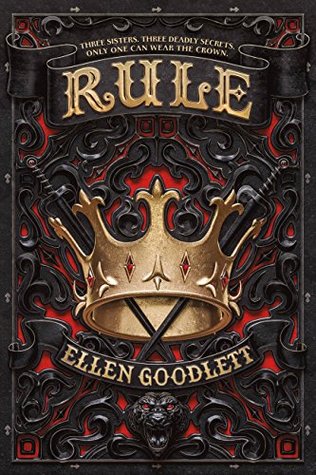 Three girls with three deadly secrets. Only one can wear the crown.

The king is dying, his heir has just been murdered, and rebellion brews in the east. But the kingdom of Kolonya and the outer Reaches has one last option before it descends into leaderless chaos.

Or rather, three unexpected options.

Zofi has spent her entire life trekking through the outer Reaches with her band of Travelers. She would do anything to protect the band, her family. But no one can ever find out how far she’s already gone.

Akeylah was raised in the Eastern Reach, surrounded by whispers of rebellion and abused by her father. Desperate to escape, she makes a decision that threatens the whole kingdom.

Ren grew up in Kolonya, serving as a lady’s maid and scheming her way out of the servants’ chambers. But one such plot could get her hung for treason if anyone ever discovers what she’s done.

When the king summons the girls, they arrive expecting arrest or even execution. Instead they learn the truth: they are his illegitimate daughters, and one must become his new heir. But someone in Kolonya knows their secrets, and that someone will stop at nothing to keep the sisters from their destiny… to rule.

I started this YA fantasy today, and am intrigued to see where I land among its camps. You see, every one of my blogging buddies that’s already read this title has fallen into the “been there, done that, 1 to 2 Stars” camp OR the “I’m so about this magical duology 4 to 5 Stars” camp. With no middle ground I can tell this book is going to make me feel something. Here’s hoping it’s love and not hate, because deadlines loom faster when it’s the latter.

Where did you land on this title? Camp 1 to 2 Stars? Camp 4 to 5? If you haven’t secured an ARC of this title are you planning on snatching it up come mid-September? Let me know below!!