I am thrilled to be the FIRST stop for The Big Inch‘s audio tour!! This is the first time our Texas-based blogging team has tackled an audiobook, and I’m super stoked we landed this gem of  a read/listen!! I don’t know about y’all, but as a big listener of audiobooks, I’ve always wondered how authors find the perfect narrator for the audio versions of their book. I’ve also pondered how someone gets involved in the audio narration field, and lucky for me, I got to interview the author and the narrator to ask these very questions! Read on to discover how that process goes down and make sure you enter to win your very own copy below!

The Big Inch (Misfits and Millionaires #1) by Kimberly Fish; Narrated by Sydney Young

Scroll down for the giveaway! 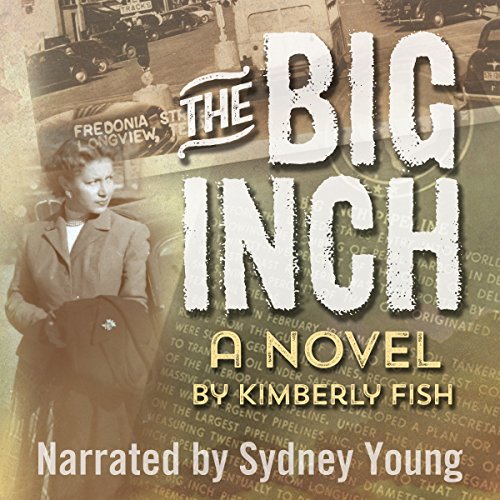 Lane Mercer is a spy recovering from a disastrous mission in France when she’s assigned to protect the interests of the new federal project sending American oil to the Allies. Thrown into the high-stakes world of Texas oilmen, she’s inventing maneuvers on the fly to outwit would be counter-intelligence and Fascist sympathizers. Complicating her mission is a handsome con-artist who manages to be under her feet at the most inopportune times. Trapped between trusting her gut or trusting her informers, Lane has to learn to navigate a town that is laced with more intrigue than she’d ever have guessed, and she soon discovers that the life she might have to save…is her own.

PRAISE FOR THE BIG INCH:

“Kimberly Fish’s writing style snatched me out of my easy chair.” — Vickie Phelps, author of Moved, Left No Address

AUTHOR PERSPECTIVE: On Choosing A Narrator for The Big Inch‘s audiobook by Kimberly Fish

There are a couple of avenues authors can pursue in turning their novel into an audiobook, but I chose to use Amazon’s ACX division because of flexibility offered with the production structure and costs. But really, I chose ACX because that’s where a fantastic Texas narrator was cutting her teeth in the trade and she asked to take on the characters from The Big Inch. Sydney Young knew how her acting skills could wrap around, over, and through some 1940s-era residents of Texas and give them listening power for a modern book consumer. It was a no-brainer to at least consider how Sydney might “read” the story and hear how she’d interpret some of those sassy and strong characters. And it’s not overstretching it to say I was sold after a few minutes of listening to her audition. When I heard Sydney try on the skin of Lane Mercer, it was just a matter of contacting her and finding the dotted line to sign. Sydney and I felt our way through the early days of setting a production schedule, talking backstory and motivations for the characters, and discovering which tics and accents were appropriate for which folks, and then…well, she took the story, settled into her production booth, and made magic happen.

I have respect for actors and interpreters of story and believe that Sydney created her own unique version of The Big Inch based off how she view the novel, responded to the characters, felt their pains, teased those romances, shared their joys, and then sweated out the resolutions. I hope audiobook fans will enjoy Sydney’s take on the historical fiction homage to the American homefront during the WWII years and will learn something new about our contribution to the war effort — especially the men and women who did something good for the greater good.

NARRATOR PERSPECTIVE: On Choosing A First Book To Narrate by Sydney Young

After I trained to narrate, then came the question of which book should I narrate first. Based upon my voice samples, offers began pouring in. But I wanted to make sure my first book was one I really cared about and could voice to the best of my ability. There were several Texas offerings high on this list due to my reading for Lone Star Book Blog Tours, but The Big Inch was first. I enjoyed its intrigue, the World War II time period, and new information about how Texas helped the effort. And I loved the romantic tension. Also, I knew I could voice Lane. The question was whether I could voice her boss, Theo Marks — a Bostonian, the hardest of all accents. I thought about it, studied the accent, and laughed at myself a great deal. And then one day, Matt Damon showed me how to soft tone it and poof, there was Theo.

After her first blog tour, I encouraged Kimberly Fish to make an audiobook of The Big Inch. Over a year later when I had learned more about the process, I informed her of ACX, where any author, regardless of budget, can make her audiobook dream come true. I told her i would audition but she should absolutely choose the best voice and most trustworthy candidate for the job. I wanted her book to find it’s audio audience.

I’m so glad she fell in love with my narration (and yes, we had some laughs as we kept tweaking Theo). After she formally offered me the job, I poured myself into the narration and enjoyed living in The Big Inch world. I love that The Big Inch will always be my first audiobook to have voiced. As you can tell, I also love the romance factor for Lane. But you’ll have to listen to the book to find out who, in the end, steals her heart, because I’m certainly not giving it away.

Kimberly Fish has been a professional writer in marketing and media for almost 30 years. In the course of research for the Longview Chamber of Commerce 100-year compilation, she stumbled across a 1940s federal works project that was too good, too war-winning,

not to be retold to a modern audience. In 2017, she released The Big Inch, her first WWII spy thriller, detailing the crazy, big pipeline project that fueled the Allies to a win in Europe. The Big Inch has also been released as an audio download on Audible. That eye-opening novel was so consumed by readers, she quickly followed it with a second WWII spy thriller set in Longview, Harmon General. Both of these novels will be helpful to her work with the City of Longview’s 150th birthday celebrations which begin in January of 2020. Comfort Plans, a contemporary novel also set in Texas, continues her love of history by weaving old letters into the renovation of an iconic Hill Country farmhouse. Kimberly enjoys speaking on the value of weaving history and nostalgia into our plans as we grow our communities for the future.

Sydney Young is a lawyer, award-winning writer and audiobook narrator from the Lone Star State. Her next theatrical project will be directing “Shakespeare in Love” for the Paris Community Theatre stage (Feb. 2019), while her novel “I AM HOUSTON,” is being submitted for publication by the Loiacono Literary Agency. Sydney has long been a reading advocate, including with her readings to an adopted second grade class each year. She loved voicing The Big Inch for all of its authentic Texas voices and true characters, all while she learned the history of the East Texas oil effort for World War II. Visit Sydney’s website for more information on her writings, theater, and audiobooks.

One Winner! Choice of Audiobook or Signed Print Copy of The Big Inch + $25 Amazon Gift Card + a WWII-Themed Surprise Gift!

VISIT THE OTHER GREAT BLOGS ON THE TOUR: