I don’t know if you’ve been following Lone Star Book Blog‘s Reviewapalooza of Becki Willis’ The Sisters, Texas series or not, but I’m here to break down the EIGHTH book in her award-winning mystery series!

I know you’re probably thinking I’m crazy for diving into a series this late in the game, but lucky for me the tour has done a fantastic job of keeping me up to date with the previous antics in the Sister cities. And now that I’ve completed Willis’ newest novel, I finally understand the charm and connection with this Texas-based series. Scroll down to check out my WILDFLOWER WEDDING review and enter for a chance to win YOUR very own signed copy and AMAZON gift cards below!!

WILDFLOWER WEDDING WITH A KILLER RECEPTION by Becki Willis

Scroll down for the giveaway!

It’s the most anticipated wedding of the year in The Sisters, when Madison Reynolds and Brash deCordova finally tie the knot!

Wedding preparations are underway, but the aisle to the altar gets rockier by the minute.

Their support is humbling, but the community’s enthusiasm soon threatens to hijack the wedding. Squeeze in a suspicious death during a Texas Independence Day celebration, the needy new widow Madison befriends, and an unscrupulous politician trying to unseat Brash as chief of police, and the path seems littered with obstacles. 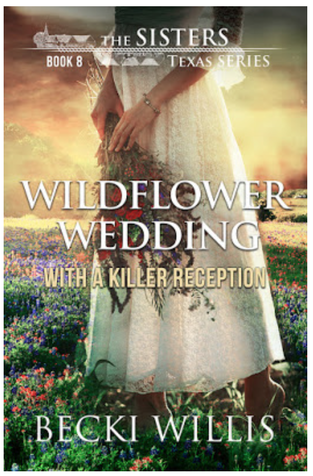 Madison will move mountains, however, to marry the man of her dreams. All they really need is each other, their children by their side, and a preacher to make it official. In an effort to please everyone, the couple opts for a private ceremony followed by a public celebration. It’s the perfect Wildflower Wedding, but who knew it would end in a killer reception?

Cantankerous Nigel Barrett hired In a Pinch Professional Services to find his estranged family, but it takes more than a home DNA test to locate his next of kin. Madison suspects he was searching for an heir, but when the wealthy rancher is killed at their reception, she’ll settle for finding someone to attend his funeral.

From the author of Forgotten Boxes, Plain Roots, and the Spirits of Texas Cozy Mysteries, enjoy book eight of the award-winning reader favorite The Sisters, Texas Series.

For maximum enjoyment, follow the series from the beginning. Readers say, “It’s like visiting with old friends!”

Thank you so much to Clear Creek Publishing, LSBBT, and the author for providing me with an eARC in exchange for an honest review.

As I mentioned above, diving into a series eight books in the making is arguably a daunting task. In addition to being introduced to the fictional towns and their full cast of characters for the first time, I also had to navigate through the events of seven previous novels. Luckily, Willis does a great job of connecting the dots and aiding new readers with the who, what, when, and wheres of the preceding installments. And while some storylines will obviously be spoiled jumping in at this stage of the game, it doesn’t detract from the overall enjoyment of the newest mysteries sweeping through the Sister cities. In fact, thanks to hundreds of pages of prior character development, WILDFLOWER WEDDING felt like reuniting with characters I’ve known for years.

That genuine sense of camaraderie was definitely aided by the fact that this book centers on the series main character, Madison Reynolds, finally marrying her former high school crush turned fiancé. I mean what’s more relatable than stressful wedding planning sessions, emotional and joke-filled rehearsal night speeches, and the excitement and jitters of finally saying, “I do?” Even if you haven’t taken the plunge yourself, I’m certain you’ve been a part of or attended enough weddings to connect to the characters in this momentous part of their fictional lives.

And speaking of momentous, it apparently wouldn’t be a wedding befitting Mrs. Reynolds without at least one murder mystery afoot. Mere weeks before her long-awaited nuptials, Madison agrees to help her elderly and (at times) cantankerous neighbor find his next of kin.

A task that becomes drastically more important when he turns up dead at her reception. Throw in another suspicious death, rising scrutiny for her new hubby’s job performance, and a trio of shady characters and it’s easy to see why the pages practically turn themselves in this exciting new installment. I’m not lying when I say it took serious willpower to not skim ahead in those tense, final action-packed pages to reach the resolution (and safety) I was craving!

Despite the fact that this story was definitely a wild ride, it wasn’t without its faults. My biggest complaints stem from two editing issues: multiple SPAG errors and several repetitive passages. While these issues are minor and not frequent enough in occurrence to deter my recommendation of this novel, it did create several instances that broke my focus from the story at hand. I truly do believe if edited under a more fine-toothed comb, these minor issues could have a major impact. Fortunately, this was an earc so I’m certain some of these errors will be caught and edited before final print.

At the end of the day this series is full of lovable characters that I’d love to revisit and meet again. From river therapy sessions with Brash (love that idea, by the way), to shopping sprees with Derron, and nonstop laughs with snarky Granny Bert (the true MVP of this book, in my opinion), this series has something for everyone. Whether you choose to start the journey from the beginning or join the party late like I did, I’m certain you’ll enjoy your time in The Sisters, Texas.

Commentary is based of an advance ecopy of this novel and may not match the final release.

Becki Willis, best known for her popular The Sisters, Texas Mystery Series and Forgotten Boxes, always dreamed of being an author. In November of ’13, that dream became a reality.

Best Women’s Detective Fiction, and Best Audio Book, won the 2018 RONE Award for Paranormal Fiction, and has introduced her imaginary friends to readers around the world.

An avid history buff, Becki likes to poke around in old places and learn about the past. Other addictions include reading, writing, junking, unraveling a good mystery, and coffee. She loves to travel but believes coming home to her family and her Texas ranch is the best part of any trip. Becki is a member of the Association of Texas Authors, Writer’s League of Texas, Sisters in Crime, the National Association of Professional Women, and the Brazos Writers organization. She attended Texas A&M University and majored in Journalism.

Connect with Becki below. She loves to hear from readers and encourages feedback!

VISIT THE OTHER GREAT BLOGS ON THE TOUR: