So it’s been a super hot minute (read: 7 months 😲) since I’ve participated in a tag on my dearly missed blog. Thankfully, y’all stuck around and kept those tags coming, which I am going to do my best to catch up on in the next few months!! The tag I’m bringing you today is fairly old (again 7 months y’all), but because of the questions it’s still pretty fun & easy to apply to 2019 answers. Thanks to Alyssa‘s over at Purple People Readers for the tag and inspiration for today’s post!

So without further ado let’s dive into the NETFLIX BOOK TAG!

The Bride Test by Helen Hoang. You can check out my mixed feelings on this anticipated contemporary here. Full disclosure: I’m certain by the time this post goes live (unless something has gone horribly wrong *knocks on wood*) this answer has probably changed.

2) TOP PICKS: A BOOK THAT HAS BEEN RECOMMENDED TO YOU BASED ON WHAT YOU’VE PREVIOUSLY READ

Foul is Fair by Hannah Capin. The marketing manager at St. Martin’s Press & Wednesday Books recommended me this title (and sent me a copy 🙌🏼) based off my positive reviews of Courtney Summers’ Sadie(a.k.a. one of my favorite reads in all of 2018). This revenge book was described to me as: “a feminist modern re-imagining of Shakespeare’s Macbeth that’s part Cruel Intentions and part Kill Bill,” so I’m sure you understand why I hyped up immediately!

Lock Every Door by Riley Sager. It was my July Book of the Month selection. Initially, I was nervous to select Sager’s newest book due to my love/hate relationship with his previously novels, but I have high hopes this will be his best work yet. To elaborate, I had a “meh” reaction to his debut novel (namely due to the cop out ending), and an excited “wtf” reaction to his sophomore novel, so based off that upward trajectory I feel like his third thriller could finally be the one I love. 🤞

4) POPULAR ON NETFLIX: BOOKS THAT EVERYONE KNOWS (2 YOU’VE READ & 2 YOU HAVE NO INTEREST IN READING)

The Ones I Read: Harry Potter series by J.K. Rowling and The Hunger Games by Suzanne Collins. There’s lots of ways to pick these, but I just used the most rated/reviewed books on Goodreads and picked the top two. Perhaps you’ve heard of these gems?

The Ones I’m Skipping: Harry Potter and the Cursed Child: Part One and Two by “J.K. Rowling” and Eat, Pray, Love by Elizabeth Gilbert. These weren’t necessarily the most “popular” options, but it’s hard to think of books you’re not interested in reading that still have widespread appeal.

Red, White, & Royal Blue by Casey McQuiston. So here’s the deal, this gift from the literary spirits is more than just a comedy. This beautiful book made me feel almost every emotion under the rainbow and I cannot recommend it enough. And despite the rage and tears it evoked, RW&RB also made me laugh. Out loud. Often. I mean the turkey scene alone solidifies this book’s place in this category. If you’ve read it tell me which part made you laugh the most below!

6) DRAMAS: A CHARACTER THAT IS A DRAMA QUEEN/KING

This is the one that’s going to bring the haters. And to that I say, I’m not bashing the books, but you’ve got to admit no lies are detected for the following character call-outs:

The Drama King: Edward Cullen from the Twilight series by Stephenie Meyers. I would justify this, but I honestly don’t think I have to. I think you’re replaying enough scenes from the books/movies that prove I’m right on this one.

The Drama Queen: Juliette Ferrars from the Shatter Me series by Tahereh Mafi. That’s right Ms. Psycho Chick herself. Now to be fair, maybe she calms the eff down in later installments (as I’ve not yet completed this series), but the instapanic princess mode she lives in in book 1 earns her the crown and the title.

7) ANIMATED: A BOOK WITH CARTOONS ON THE COVER

Let Me Hear a Rhyme by Tiffany D. Jackson. This was a wide-open category. I mean almost every book I’ve selected previously would also work for this prompt so I just picked a title I’m very interested in reading sooner than later. This novel promises to pull on the heartstrings and pack some heat while dropping the beat. And if it’s anywhere near as intense are her debut novel, I’m in for a wild ride.

8) WATCH IT AGAIN: A BOOK OR SERIES YOU WANT TO REREAD

Stalking Jack The Ripper series by Kerri Maniscalco. If I had knocked this slump a little sooner I could have joined my girl Destiny’s #StalkAlong readathon back in June, but unfortunately I’m a little too late. But I’m not out of the game just yet, because the fourth and final novel doesn’t hit shelves until September. If I could stop staring at these gorgeous covers I might just get it done in time!

9) DOCUMENTARIES: A NONFICTION BOOK YO’D RECOMMEND TO EVERYONE 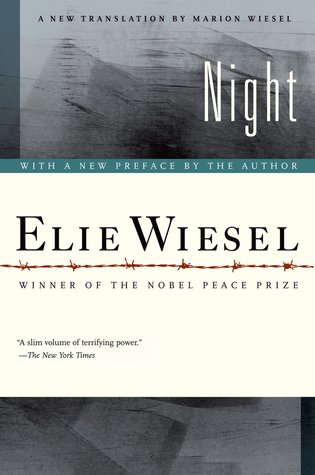 Night by Eliezer Wiesel. Especially in today’s turbulent times I believe this super short and super emotional read could spark some much need conversation. I vividly remember reading this on a plane as a young teen (huge mistake btw) and thinking how could we allow the world to get like this?? As an adult now, all I’m saying is this is eye-opening.

The Illuminae Files by Amie Kaufman & Jay Kristoff. This series, which is extremely hyped for its unique formatting, Easter eggs, cinnamon roll male leads, and a highly quotable AI, is unlike anything I’ve ever read (or listened to) before. The level of detail that goes into this trilogy is remarkable and the stories are so addictive you’ll be turning pages at warp speed.

11) NEW RELEASES: A BOOK THAT JUST CAME OUT OR WILL BE COMING OUT SOON THAT YOU CAN’T WAIT TO READ

The Beautiful by Renée Ahdieh and Ninth House by Leigh Bardugo. I know, I know it only says to pick one title, but how can any self-respecting book nerd limit this question to only one novel?? These two titles — oh crap I just thought of a third one (The Queen of Nothing…forgot that publishing date got pushed up!!) — are high up on my READ ASAP list. So if you or a loved one has an extra copy lying around (or even one I could borrow), let your girl know!

And anyone who wants to partake!! Link back to me so I can see your answers!! =D

That’s all I’ve got for you today! Hope you enjoyed my bookish tag and the answers I supplied. If you’ve participated before, let me know below so I can check out your answers!!

21 thoughts on “The Netflix Book Tag”